What's in a Name?

When I was about 16 or 17 I decided that should I ever have children, one would definitely be called Chelsea….. obviously this was because I was (and still am) a massive Chelsea FC fan.  Fast forward a few years and I actually had a child which I did not name Chelsea.  By that time, I had grown up and somewhat matured and realized that to name your child after your favourite football team would have been a mistake. (Not as bad as if I had supported Arsenal or Tottenham, mind you).  I also had the idea back then that I would get married on the pitch at Stamford Bridge before a game.  Young people and their crazy ideas…! [And no, that definitely did not happen either].


I’m just glad I grew up a bit before I got around to naming children.  Obviously, there is quite some thought that goes into the process so you don’t forever saddle your offspring with a name they hate.  There is such stigma surrounding names sometimes that it makes you wonder what parents were thinking.  Back in the 80’s the joke names were Sharon and Tracey - stereotypical loudmouthed girls from Essex with black tights and white high heels.  I would like to take a moment here to thank my mother who in her absolute wisdom actually named me Sharon Tracey… a name which I have never been able to live down since this programme was aired:
BIRDS OF A FEATHER

To this day, I still get embarrassed saying my full name, even though absolutely nobody in American knows the reason.


But America has their own problems with names.  I’m not talking about celebrities and their weird Apples, Buzzes and Apollos, but your typical suburban stay at home mommies who have nothing better to do than have their hair and nails done and take the littles to the park.  It seems as though they are all trying to one-up each other in crazy names.  Here are a few I’ve heard:

I would like to thank Rosie M for some of the names on this list and I just have to mention the conversation she related when she asked a mommie if her daughter Porsche was named after the Shakespearean heroine and the answer was "No, my in-laws have a Porsche dealership"  (Lucky it wasn't Volkswagen really!)  [Oh dear].

Sometimes, these names backfire.  Atticus, for example is a name I've also heard bandied about a few times. But these parents didn't realize what they were doing and have now changed his name.  [*slaps forehead*].

It does seem though that boys have the worse end of the deal where names are concerned.  For the first part of 2015, the top five boys names in the USA are Atticus, Asha, Ezra, Silas and Declan whereas for girls they are Charlotte, Amelia, Olivia, Isla and Ava.  It appears Anglophilia is alive and kicking in the USA as obviously Charlotte is a nod to the new Royal.

So it would seem that my plan to call my child Chelsea wouldn’t have been that bad after all.  In case you were wondering, my first child is named Liam and, oh dear, he was kind of named after a footballer (oops). But his grandparents are, in fact, Irish so I’ve got that going for me.

Last weekend, which was Labor (Labour) Day weekend here, we went to a car and bike show – just a small one put on by a local organization and I must say, Americans love their old cars!

The thing is, they don’t love them in the same way British car enthusiasts love ‘em.  It seems to me in Britain a lovely old (classic) car is one that has been taken care of  since new, kept in original condition and given lots of loving care.  Basically, how your granddad treats his car.

In America, the old car needs updating with all new paintwork, chrome, souped up engines and new interiors. Very big and brash.  Definitely not your grandparent’s car!

The photos here were taken last year in England when we went to a small village fete and there was a car show which looked like a bit of an afterthought.  It was as if a few old fellows decided to give their family car a bit of a wash and polish and drive to the village green.  They are small and compact and very “British.” Look at the little mini, for example!! [Bless] 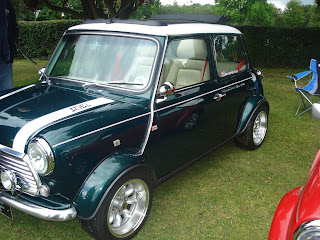 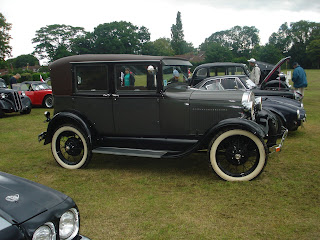 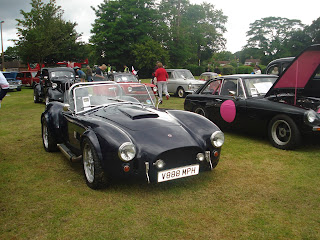 And then we have the Americans…. Big, bold and very, well, American.

These things are HUGE.  They’re like bloody boats and they’re not the kind of thing you see driving down the freeway every day.  Definitely not family cars.  It was all very American Graffiti.


They were shiny, colorful and chrome-y (not sure that’s an actual word, but it works).   It didn’t look like many of them had their original color schemes either. 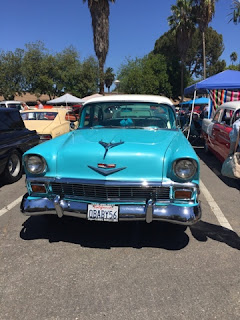 Then of course, there's a fascination with flames...
Old cars with very new paint... 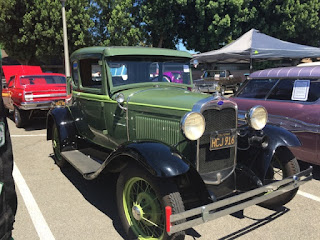 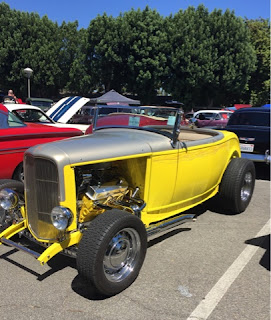 Even a Rolls Royce which managed to look like an American boat.  I have never seen an uglier Rolls Royce in my life.  Because, you know, I'm always travelling in style (not)..
I could not even begin to imagine how any of these cars could use the roads in England.  They are so massive and I expect the turning ratio would just not work on those narrow country roads.

They would get stuck on a corner and end up surrounded by sheep, causing a backup of irate motorists politely shaking their fists and grumbling about the queue.  I know, an unlikely scenario but it just sounds so very British, doesn’t it?

It was nice seeing all these cars, but the weather was so hot and the car park was sweltering so the very best part of the day was going into the bar for a beer!  Obviously.